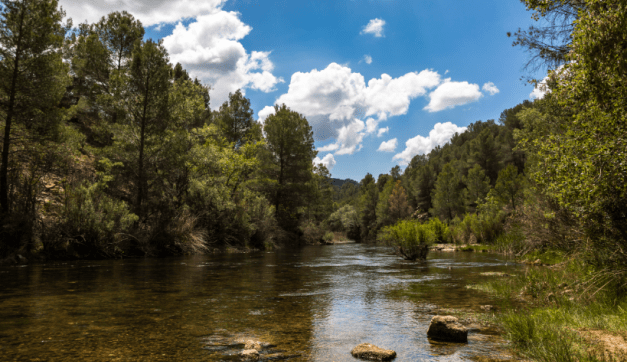 Las Hoces de Cabriel Natural Park is the largest protected area in the Region of Valencia with a total of 31,446 ha which extends into the Region of Castilla-La Mancha. It is located in the region of Requena Utiel, between the towns of Villargordo del Cabriel, Venta del Moro and Requena.

It is, without a doubt, one of the most important parks in our territory, because of its size as well as its scenic and geological beauty.

If we venture to visit the western area of the park in the province of Valencia, we will find the Cabriel River, which flows through calcareous massifs and dolomitic geological formations of great uniqueness and interest for the visitor. The differential erosion of the outcrops generates the appearance of impressive vertical ridges such as the “cuchillos” or sharp rock formations and the gorges or “hoces” which are very famous among tourists.

Thanks to the river which acts as the backbone of the park, we can observe different types of habitats, from the river itself to riverside forests and formidable outcrops where great birds of prey sleep such as the Bonelli’s eagle, golden eagle, and Eurasian eagle-owl.