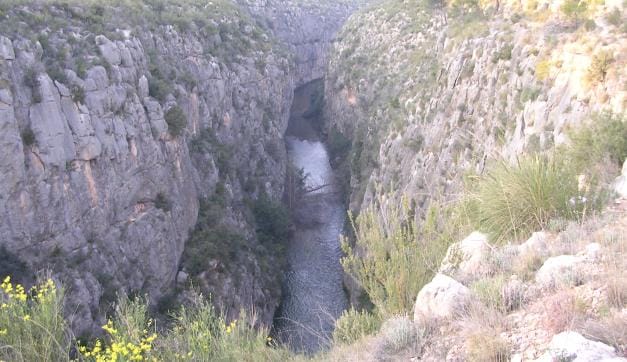 "Los Calderones" Municipal Nature Reserve is located in the town of Chulilla, specifically in the region of Los Serranos (Valencia), comprising an area of .

Its landscape is characterised by its spectacular geological formations, such as the Hoces of the Turia River and the surrounding mountains. The erosion from the current of this river as it passes through Chulilla has created a deep gorge with vertical walls which has become a splendid canyon after many years.

This reserve is considered one of the most beautiful places in the Region of Valencia and is home to a multitude of attractions for tourists. Here you will find cultural elements and heritage, but it is also a unique enclave full of fauna and biodiversity

To access Los Calderones, you must travel through the Chulilla town centre, following the indications and signs located at the points of greatest influx.

The areas designated for parking are located at the entrance to the town. To start the circular itinerary, you have to cross the town of Chulilla and descend to the river bank. The first section consists of orchards located on the river banks (1).  Here you will observe species such as the common kestrel, red-legged partridge, European hoopoe, Eurasian wryneck and rock sparrow.

As you continue along the itinerary, you will enter the spectacular canyon that forms the Hoces of the Turia River. The peregrine falcon, red-billed chough and Alpine swift are the most representative species, but it also possible to see a Bonelli’s eagle. After travelling over the walkway over the river (2), you will enter a small riverside forest where Eurasian golden orioles, European green woodpeckers, great spotted woodpeckers and European scops owl can be seen.

Along the river you can also see kingfishers, white-throated dippers or the grey wagtails. The last stop before returning is Charco Azul (Blue Pond) (3) where you can observe the common moorhen and grey heron.

The town of Chulilla has a wide range of restaurants and accommodations.