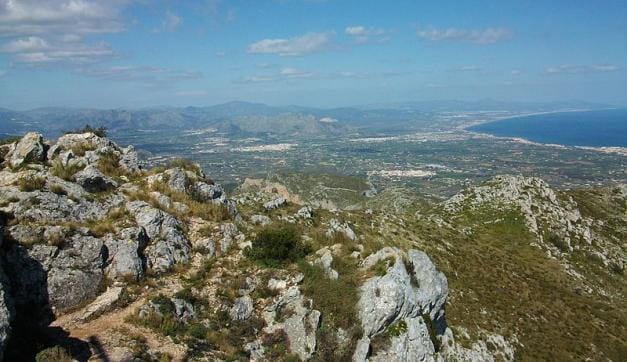 Montgó Natural Park is a coastal mountain located between the municipal boundaries of Denia and Xabia. It currently covers an area of and its highest point rises to in altitude. This place has witnessed the passage of man since ancient times, which gives it great cultural and archaeological value. Due to its location and the beauty of its landscapes, it is the perfect place to do all kinds of outdoor activity.

This protected area is distinguished because it is home to more than 650 different species of flora, including endemic species such as Carduncellus dianius. The Montgó massif reaches the Mediterranean Sea at the Cape of San Antonio; at its foot it gives shelter to the Nature Reserve of the same name since 1994 for its important ecological value and rich biodiversity.

Its vegetation is formed by the classic Mediterranean forest of Aleppo pines with kermes oak and other endemic species. And this is not all, since this rich natural heritage is accompanied by various archaeological sites such as the Iberian settlements of Alto de Benimaquia and Pico del Aguila, which you can also visit.

Its cliffs serve as a refuge for many bird species. Birdwatching enthusiasts can find numerous species of coastal bird fauna such as the yellow-legged gull, European shag and Scopoli's shearwater.

The most emblematic birds in the Region of Valencia such as birds of prey like the Bonelli’s eagle, peregrine falcon and the Eurasian eagle-owl nest in the narrow outcrops