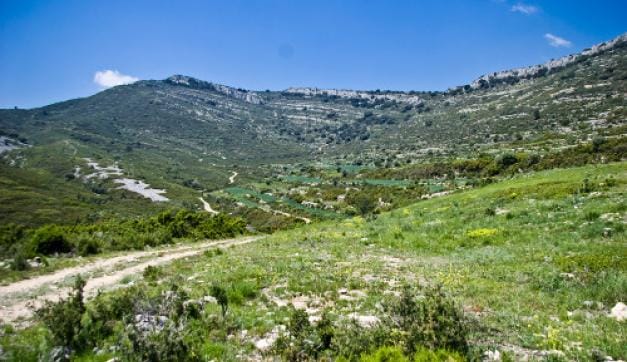 "Racó del Frare" Municipal Nature Reserve is located in the region of Baix Maestrat (Castellón). It has an area of 207.32 ha and occupies part of the town of Sant Mateu.

Its landscape is characterised by a tabular geological structure, giving it a characteristic relief with horizontal buttes. It is a natural space with a high ecological value as a result of its fauna and its vegetation. As for the most representative species, shrubs such as the savin, junipers, kermes oak and other typical Mediterranean species predominate. As for fauna, you will find birds of prey such as the golden eagle or the peregrine falcon.

Another one of the appeals of this reserve is that it is public and hiking is permitted along the PRV-214 trail and its different turnoffs, which run through the ravines of the Ratlla, La Rambleta and Barranc del Salt, reaching a large part of this landscape.

Access to the bird watching itinerary is made from the town of Sant Mateu. We take route CV-130, which connects this town with the town of Tirig. After about 3 km, we exit at the second sign at the entrance to the Reserve and continue along a paved road until we reach the "Racó del Frare" Nature Reserve information board, and where we will leave the car.

The beginning of the route (1) allows us to observe species associated with agricultural ecosystems, centenarian olive trees being the most represented. The common blackbird, little owl and crested lark are commonly seen, and there has been a spectacular increase in the number of thrushes in these fields in search of food.

We leave the paved road and turn left onto Camí del Mas de Leandro. Along this section (2), the path runs through areas of Mediterranean scrub which overlook the valley dotted with patches of different crops. This area is frequented by species that need open areas such as the short-toed snake eagle, Montagu’s harrier, European bee-eater, great grey shrike or the European nightjar.

The itinerary continues through a small gully with frequent scree and rocky outcrops until it reaches Racó del Frare and the imposing Roca dels Ermitans (3). It is recommended that visitors make a stop at this point to observe typical rock-dwelling bird fauna such as the golden eagle, peregrine falcon, blue rock thrush and Alpine swift.  The abundance of mountain goats along this last stretch of our route is also worth highlighting.

Restaurants and accommodations can be found in the town of Sant Mateu.

It is recommended that you visit “LLacuna de Sant Mateu” (4), especially during migration and times of winter stopovers. It is an endorheic lagoon with acquatic vegetation where you can complete your bird watching itinerary with species of wader birds, herons, ducks and even cranes and storks.